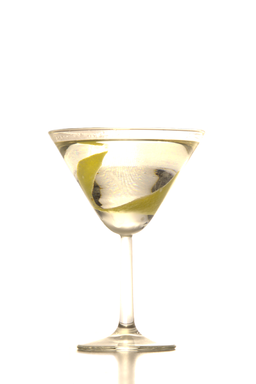 In 1953 Vesper Lynd makes her first appearance in the James Bond novel Casino Royale. Vesper holds the distinction of being the only Bond girl that James Bond considered leaving the Secret Service to marry. Bond’s feelings for her heighten the betrayal he later feels when he discovers that she is a double agent who has been coerced into working for the Russians.

The Vesper Martini, like the woman it’s named for, is a double agent and it packs a punch. The base is mostly British gin betrayed by a touch of Russian Vodka, but all the action takes place in the French aromatised wine Lillet.

Vesper Lynd is named for evensong or vesper prayers in the canonical hours. Vespers are the traditional evening prayers of the Orthodox, Catholic, Anglican and Lutheran liturgies and are said at the sunset hour. When Vesper Lynd meets James Bond she tells him, “I was born in the evening,..on a very stormy evening…”

A very stormy evening may be just the time to take solace in this sophisticate variation on a martini.

In the novel Jame Bond describes his recipe to a bartender:

“Just a moment. Three measures of Gordon’s, one of vodka, half a measure of Kina Lillet. Shake it very well until it’s ice-cold, then add a large thin slice of lemon peel. Got it?”

“Certainly, monsieur.” The barman seemed pleased with the idea.

The Vesper Martini as it is described in the novel is a booze bomb. Besides being three and a half ounces of spirits the spirits that were described are higher proof versions of those widely available today. Gordon’s gin in 1953 would have been a 94 proof spirit while Russian vodka of period would have been 100 proof.

Kina Lillet has also been reformulated for changing tastes. Kina in the title refers to quinine which was removed in 1986. Quinine would have made Kina Lillet dried and added a touch of bitterness.

If you don’t mind a bit of historical adaptation use Lillet Blanc and whatever you have on hand. Gordon’s if it’s within reach.

If you are a purist you can add a touch of quinine or bitters to the mix or subsitute the quinaquina Cocchi Americano. Pick up a bottle of 100 proof vodka. Preferably Russian and distilled from grain. Finally you can find 94 proof export version of Gordon’s in many locations around the world. Do your best imitation of an international spy and track some down in an exotic foreign locale.

If you’re crazy track down some old bottles and have at it.

Does it make a difference? In a word yes. Many of the molecules that we perceive as flavor and aroma are soluble in alcohol. This means that the higher the proof gin would deliver more of the botanical’s flavors than today’s versions. The higher proof vodka should also help to release more flavor in the cocktail overall.

Not to mention, a slightly more bitter version of Lillet will change the balance of the cocktail overall. My preference is to add a dash of orange bitters to adjust and it works for me.

Of course, I’m not much of a Bond fan so I’m happy to just enjoy a clean sophisticated classic cocktail. Beyond that it makes a great starting point for a number of interesting variations.

One thought on “Vesper Martini Recipe”

Get the Summer Cocktail Guide